Saturday morning I decided to brave the outside world and go to the store.  I showed up at BJ’s, our local wholesale store, and was amazed by the crowds.  There wasn’t a single shopping cart to be found and, according to someone leaving the store (empty-handed) the lines were an hour-plus long.  I guess the panic around stocking up on supplies was here too.  I decided not to wait, and instead went to Walgreens which was practically empty and was able to get a few of the things I needed.  Later in the evening I went to our local Star Market grocery store and found it to be surprisingly full of food and low on customers.

We got take-out lunch from a local restaurant in an attempt to have a tastier lunch and to support a local business.  It seems like small businesses are going to take a beating during this and we are going to try do our small part to help support them.

Our sense is that different families are taking the quarantine in different ways.  Some kids are allowed to get together with friends, others aren’t.  We are holding to a strict interpretation and hopefully others will start to heed the advice and take the social distancing more seriously.

I was disappointed to hear a radio add for a club advertising a party Saturday night, the sense is that people in their 20s are not taking this seriously and are still out socializing and potentially spreading the disease.  The concept of flattening the curve and allowing our healthcare system to not get overloaded seems to make so much sense to us, but clearly not everyone is getting the message.

Knowing that we were going to be around the house for a long time, I decided to do a project that I had been looking forward to.  The girls had received a large soccer goal and net for Christmas and this seemed like a good time to put it up.  We first had to cut down two over-grown bushes to clear the space, and then we worked to put up the net and goal.

In the first day it was a big hit and hopefully will get used in the coming weeks.  It seems like spring soccer season might get cancelled so this is a chance to play some family soccer in the backyard (don’t worry, we’ll play in front of empty stadium, no fans allowed) 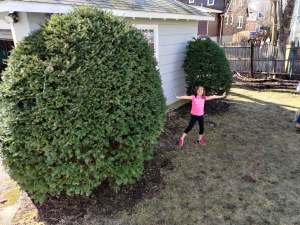 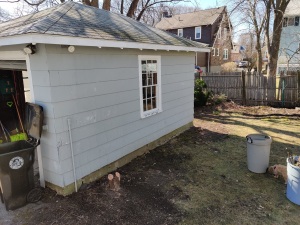 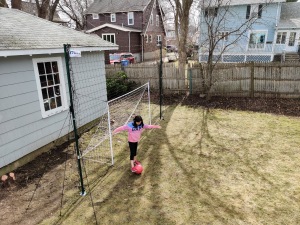